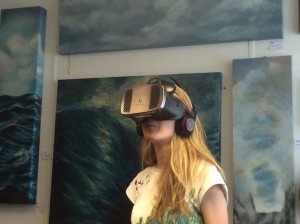 An updated version of ‘Verisimilitude II’ was exhibited as part of the Coexist studios open weekend at Hamilton House, Stokes Croft, Bristol held on 10th-11th September 2016.  The installation was incredibly popular with people often queuing outside the studio to experience it.

‘Verisimilitude II’ combines artwork by Pilar Cortés with sound & music by Marcus Dyer, to create a fully immersive living painting.  An innovative walk detection feature allows participants to explore the work by walking on the spot to move forward in whichever direction they are facing.

Since being selected winner of ‘Most Immersive’ entry for the 2015 Global Archiact VR Games Jam, TSITAPH was contacted by IdeaLens to port the application to their new VR system.  As a result, we were sent a developer model of the as yet unreleased IdeaLens K2 VR headset. 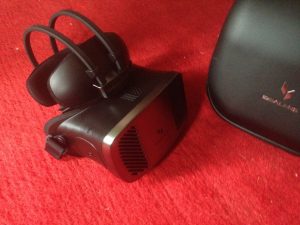 Unlike most current VR systems, the IdeaLens K2 does not require a mobile phone or tethering to a PC, making it entirely wireless and therefore an excellent choice for VR-based art installations.  It’s also much more comfortable, with a fitting mechanism which distributes weight over the head, positioning the battery pack at the rear of the device.  It is by far the most comfortable VR set we’ve had the pleasure of using.  The increased processing power of the device compared to the mobile VR systems we were using in the past, has allowed significant improvements in the visual quality of this piece.